We went road trippin’ this past Labor Day weekend up to Maine with some friends. Eight adults and nine children, we all piled into the LoveSac bus and explored Maine’s beaches, which are only an hour north of Boston. The boys hit up surfing one day to catch the waves from the tail-end of Hurricane Earl (although it was just a tropical storm by the time it hit New England). We ate a lot of greasy seafood…it was so good especially the lobster rolls and sweet potato fries. But what was not good was the double chin and extra set of love handles that I brought home with me. No, that is not good since I’m already gaining pregnancy weight.

York beach was one of my favorites. There is a beautiful famous lighthouse, and I love how wide the beach is at low-tide. 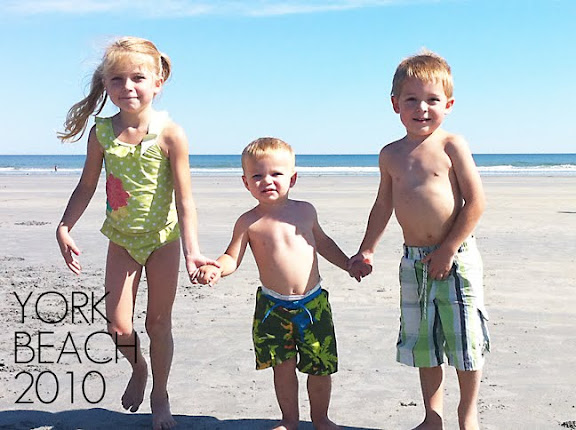 Our lousy attempt at a family picture. I’ve come to accept that it is almost impossible to get a good shot of us.

The LoveSac bus was our mode of transportation. It was a riot! One of our friends owns the furniture company, and the bus so happened to be in town so we decided to take it. The kids loved it because they could lounge and watch movies on a big flat screen TV. It is quite posh inside with shaggy carpet, leopard-print cushions and black curtains. I thought it was hilarious because wherever we went, it drew attention. People thought we were rock stars, chasing and shouting after the bus. Until we opened the door and they saw a bunch of disheveled parents and rowdy children, their dreams of meeting a rock star quickly disintegrated. But we always had a good laugh.

We also went to the local zoo and amusement park and Ogunquit Beach.

Hello and welcome to my creative space! I'm Darleen... creator, designer, DIYer, healthy eater, party planner and mother of 4. Oh and one lucky wife! This lifestyle blog is where I share what I am currently up too and inspired by. Thanks for stopping by!

Get the Darling Newsletter

Stay in the loop on all things Darling! Be the first to receive exclusive content, hear about upcoming collaborations, sales and much more!

Back to School Ideas!

Have you thought about back-to-school? It's right around the corner! Here are top posts of back to school ideas and tips!

Grab your dangles! The sun is out; the hair is up! Show off your earrings.

Be inspired with this outdoor summer dinner party!

All images and content, unless otherwise stated, are property of Darleen Meier. They are not to be reproduced for individual or commercial purposes. Please do not use any of my images without proper links back to my site. Darling Darleen also contains affiliate marketing links. This means that when you click links or purchase items (at NO cost to you), I may receive a small commission for the referral. I only post and recommend links from companies and brands that I love, so please know that you are in good hands. Thank you so much for your support!

Wish summer nights could last all year long! We sa

Using my swimsuit as a fun colorful top. It’s wo

Beachside shopping with these cuties before we hit

Where all white picket fences lead to the beach—

I haven’t done a party DIY in a while. It’s ab

We are lucky to live not too far from this beautif